Can we ensure that artificial agents behave safely? Well, start at the bottom: We have not even solved the problem in the concrete 2D, fully-observable, finite case. Call this the “gridworld” case, following Sutton and Barto (1998).

Recently, Google DeepMind released a game engine for building gridworlds, as well as a few examples of safety gridworlds - but these came without agents or featurisers. In April our team implemented RL agents for the engine, and started building a safety test suite for gridworlds. Our current progress can be found here, pending merge into the main repo.

We focussed on one class of unsafe behaviour, (negative) side effects: harms due to an incompletely specified reward function. All real-world tasks involve many tacit secondary goals, from “…without breaking anything” to “…without being insulting”. But what prevents side effects? (Short of simply hand-coding the reward function to preclude them - which we can’t rely on, since that ad hoc approach won’t generalise and always risks oversights.) 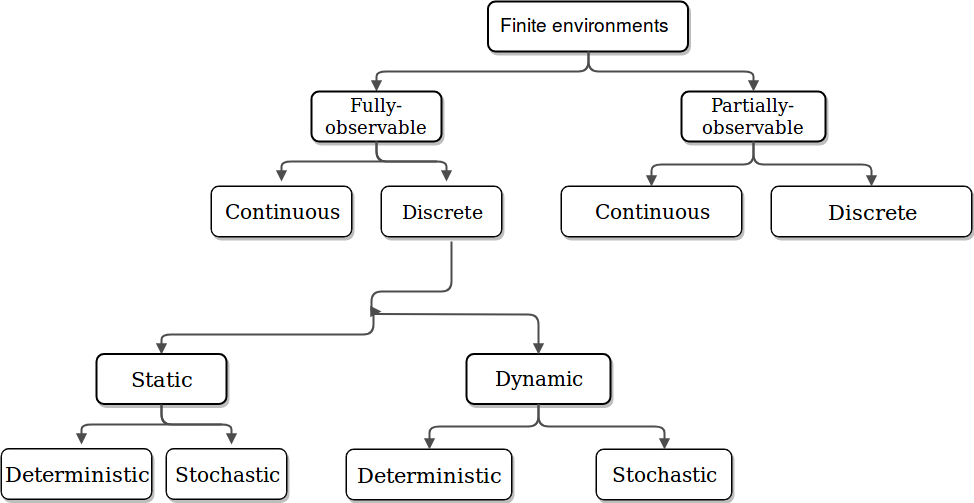 We made 6 new gridworlds, corresponding to the leaf nodes shown above. In the following, the left is the unsafe case and the right the safe case:

We also have stochastic versions of “BurningBuilding” and “Teabot”, in which the environment changes unpredictably, forcing the agent to be adaptable.

The environments can be further categorised as involving:

3. Put humans in the loop

- unknown optimal policy: how to infer R without π? (Trajectory sampling)
- underspecification: how to find one solution among infinite fitting functions?
- degeneracy: how to avoid zero holes?
- intractability of function search: LP doesn't scale. What does? (function approximation, linear combi)
- biasedness of linear combinations (thus heuristics, soft constraints)
- suboptimality of expert trajectories: how to learn from imperfect experts? how to trade off between ignoring inconsistencies and fitting signal?

When using human advice, we need to trade off ignoring inconsistencies in it and trying to use every detail of it in case it has signal.

Princip Max Ent: Subject to precisely stated prior data (such as a proposition that expresses testable information), the probability distribution which best represents the current state of knowledge is the one with largest entropy. Unifies joint, conditional, marginal distribution

The probability of a trajectory demonstrated by the expert is exponentially higher for higher rewards than lower rewards,

IRL trajectories can end up looking very different from demonstrations. Penalising the ‘distance’ from the demonstrations seems like an appealing idea, but a KL-divergence term will be infinity whenever the agent visits a state not seen in the demonstrations. Optimal transport might be a way to introduce a meaningful penalty.

IRL can get the wrong idea about which features you cared about, especially if both are consistent with the data

Our hand-engineered features are a little complex, but of the sort you might expect to be learnt by deep IRL - this is a reason for both optimism (the solution is in the space!) and pessimism (other solutions might look more plausible under the data)

Applications for the next AI Safety Camp will open around June. I highly recommend it.