A medical reversal is when an existing treatment is found to actually be useless or harmful. Psychology has in recent years been racking up reversals: in fact only 40-65% of its classic social results were replicated, in the weakest sense of finding ‘significant’ results in the same direction. (Even in those that replicated, the average effect found was half the originally reported effect.) Such errors are far less costly to society than medical errors, but it’s still pollution, so here’s the cleanup. 1

Psychology is not alone: medicine, cancer biology, and economics all have many irreplicable results. It’d be wrong to write off psychology: we know about most of the problems here because of psychologists, and its subfields differ a lot by replication rate and effect-size shrinkage.

One reason psychology reversals are so prominent is that it’s an unusually ‘open’ field in terms of code and data sharing. A less scientific field would never have caught its own bullshit.

The following are empirical findings about empirical findings; they’re all open to re-reversal. Also it’s not that “we know these claims are false”: failed replications (or proofs of fraud) usually just challenge the evidence for a hypothesis, rather than affirm the opposite hypothesis. I’ve tried to ban myself from saying “successful” or “failed” replication, and to report the best-guess effect size rather than play the bad old Yes/No science game. 2

Figures correct as of March 2020; I will put some effort into keeping this current, but not that much.
Code for converting means to Cohen’s d and Hedge’s g here.

No good evidence for many forms of priming, automatic behaviour change from ‘related’ (often only metaphorically related) stimuli. 3


(Set aside the ethics: the total absence of consent - the boys and parents had no idea they were in an experiment - or the plan to set the forest on fire and leave the boys to it.)

Tavris claims that the underlying "realistic conflict theory" is otherwise confirmed. Who knows.

After the initial backlash, it focussed on subjective effect, a claim about “increased feelings of power”. Even then: weak evidence for decreased “feelings of power” from contractive posture only. My reanalysis is here.

5 claims involved, three of which are just popular misunderstandings:

1) the one the authors actually make: that poor performers (e.g. the bottom quartile) overestimate their performance more than good performers do: $$L > U$$ 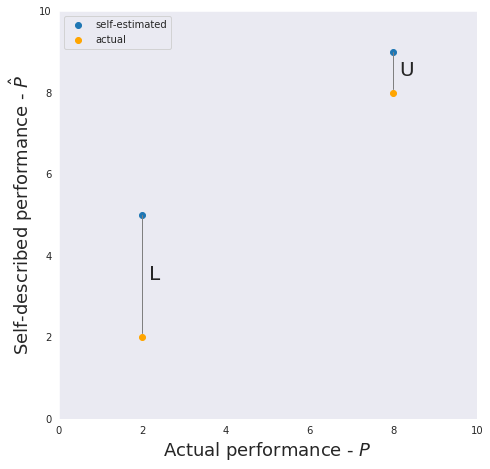 (Formally "the difference \( \hat{P} - P \) has a negative slope over actual performance moderator".)

3) the meme: that there's a u-shaped relationship between perceived and actual ability. "The less competent someone is, the more competent they think they are". 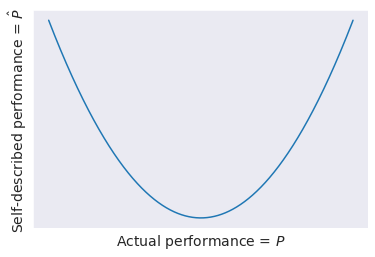 4) Alternatively, that poor performers think they're better than good performers. 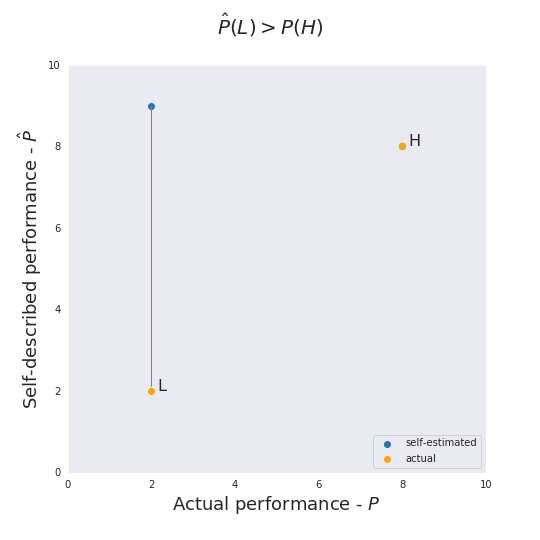 5) the authors' explanation: that (1) is caused by a lack of 'metacognitive' skills, being able to reflect on your ability at the task. That it's a cognitive bias suffered by the worst at a task. 5

Really we should distinguish the correlation of the mindset with attainment vs. the effect of a 1-hour class about the importance of growth-mindset on attainment. I cover the latter but check out Sisk for evidence against both. 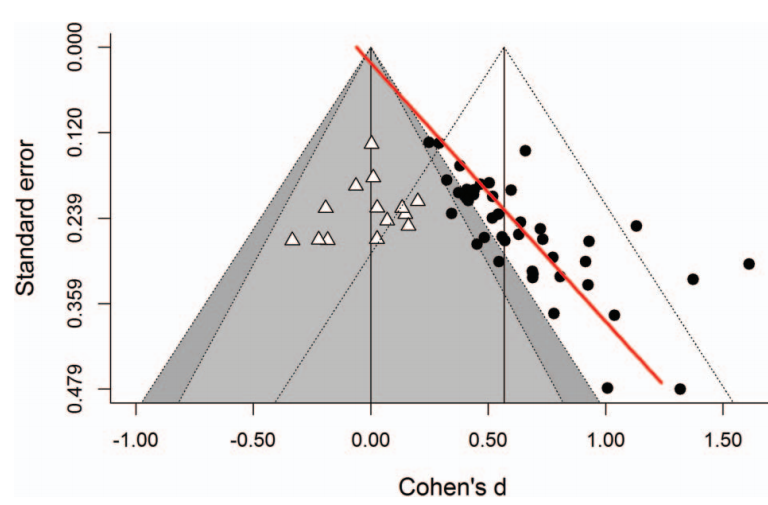 
Note from a professor friend: the idea of a dual-mating hypothesis itself is not in trouble:

[What I propose] is not a reform of significance testing as currently practiced in soft-psych. We are making a more heretical point… We are attacking the whole tradition of null-hypothesis refutation as a way of appraising theories… Most psychology using conventional H_0 refutation in appraising the weak theories of soft psychology… [is] living in a fantasy world of “testing” weak theories by feeble methods.

What now? When the next flashy WEIRD paper out of a world-class university arrives, will we swallow it?

Andrew Gelman and others suggest deflating all single-study effect sizes you encounter in the social sciences, without waiting for the subsequent shrinkage from publication bias, measurement error, data-analytic degrees of freedom, and so on. There is no uniform factor, but it seems sensible to divide novel effect sizes by a number between 2 and 100 (depending on its sample size, method, measurement noise, maybe its p-value if it’s really tiny)…

The melancholy of pareidolia

Let me drop out of my proper "effect size estimation > binary truth or falsity" talk for a moment: There is something unbearably sad about the Wikipedia page for Ego depletion.

It's 3500 words, not including the Criticism section. It is rich with talk of moderators, physiological mechanisms, and practical upshots for the layman. And it is quite possible that the whole lot of it is a phantom, a giant mistake. For small effect sizes, we can't tell the difference. Even people quite a bit smarter than us can't.

If I wander around an old bookshop, I can run my fingers over sophisticated theories of ectoplasm, kundalini, past lives, numerology, clairvoyance, alchemy. Some were written by brilliant people who also discovered real things, whose minds worked, damnit.

We are so good at explaining that we can explain things which aren't there. We have made many whole libraries and entire fields without the slightest correspondence to anything. Except our deadly ingenuity.

I include a claim if there was at least one of: several failed replications, several good meta-analyses with notably smaller d, very strong publication bias, clear fatal errors in the analysis, a formal retraction, or clear fraud.

I also include cases like growth mindset, where the eventual effect size, though positive, was a tiny fraction of the hyped original claim.

I compare to the original paper's effect size because I am lazy and barely capable of the better alternative, a careful averaging of high-quality supporting papers.

Thousands of bad papers are published every year, and catching them all would be a full-time job even if they were all included in systematic replication or reanalysis projects, ripe fruit. My rule is that if I hear a spurious effect discussed, or see it in a book, or if it could hurt someone, it's noteworthy.

Why trust replications more than originals?

Near-universal rates of pre-registration and higher rates of code and data sharing. (For "direct" replications, the original target study has in effect pre-registered their hypotheses, methods, and analysis plan.)

But I don't trust any of them. I look for 3+ failed replications from different labs, just to save me lots of rewriting, as the garden of forking paths and the mystery of the lefty p-curve unfold.

Some popular books with uncritical treatments of the above

Thanks to Andrew Gelman, Stuart Ritchie, Anne Scheel, Daniël Lakens, Gwern Branwen, and Nick Brown for pointers to effectively all of these.

All honour to the hundreds of ‘data thug’ / ‘methodological terrorist’ psychologists I’ve cited, who in the last decade did the hard work of cleaning up their field.