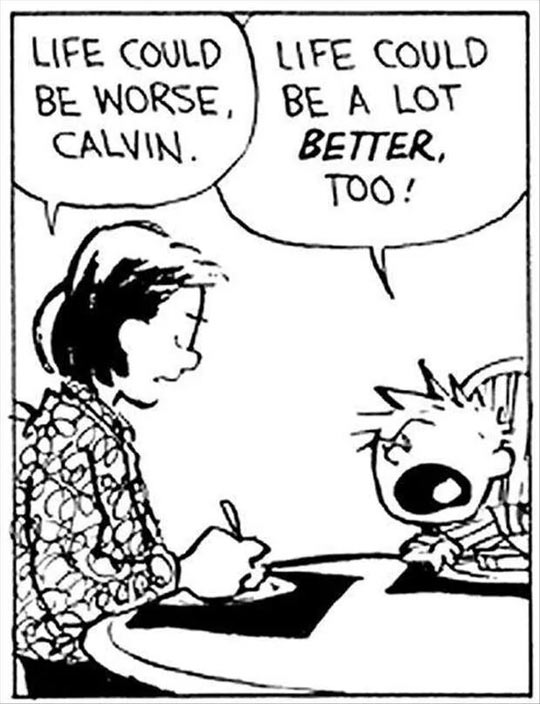 Everything is amazing right now, and nobody’s happy… I was on an airplane and there was internet, high speed internet on the airplane… I’m watching YouTube clips; it’s amazing… then it breaks down and they apologize: ‘the internet is not working’. And the guy next to me goes ‘pah! this is bullshit!’ …

Everybody on every plane should just constantly be going: “Oh my God, wow!” … you’re sitting in a chair in the sky! …People say ‘there’s delays on flights’ - delays? Really? New York to California in 5 hours! That used to take 30 years and a bunch of you would die on the way there…

we do not notice absolute changes in stimuli; we notice relative changes. Which leads to an answer to the question above: the error that needs to be reduced in the brains of organisms such as ourselves is not absolute error, but relative error.

When deciding whether a situation is good or bad, you can compare up (to a superior reference class) or compare down.

A key finding of the behavioural and psychological sciences is that humans don’t take absolute measurements (naturally). Instead we find some similar object and judge things relative to it. This is why anchoring, framing effects (etc) work on us, when they shouldn’t. Most importantly: we seem to judge value this way too. The tantalising possibility is that we can create value for free, by merely changing our framing.

When it’s important to improve, you want to compare up. When it’s more important to feel good, or to just get on with it, you want to compare down. I try to do plenty of both. “Relative to the human average I’ve done a lot and know a lot.” and “On the grand scale of things, I haven’t done very much yet.” Comparing up is more natural to me, so I make an effort to recall my achievements and the base rates.

Saying “what I have is good” might reduce your drive to improve the situation. Are the two package deals 1) gratitude & de facto conservatism, or 2) aggro, envy, & progress? Yes, maybe, but we can always try to alternate. really fast.

I found exactly one paper vaguely testing the comparing-up intervention. But the similarities between physical perception and value perception (both involve relative top-down processing) make me wonder if predictive processing is involved. The connoisseur's hammer for every psychological nail.

There is some relation to Stoic philosophy and CBT too.

The idea is in the same space as growth mindset, or grit, or any number of overhyped academic rehashes of gumption.

Then there's mindfulness, which is a different claim about one's stance having strong effects on value of experience.

Branko Milanovic, just before setting up a strawman to dismiss:

For Julius Caesar to read a book overnight, easily move at night around his palace, or listen to the songs he liked would have required perhaps hundreds of workers (slaves) to hold the torches or sing his favorite arias all night. Even Caesar, if he were to do that night after night, might, after some time, have run out of resources (or might have provoked a rebellion among the singers).

But for us the expense for a similar pleasure is very small, even trivial, say $2 per night. Consequently, some people come to the conclusion that Caesar must have had tiny wealth measured in today’s bundle of goods since a repeated small nightly expense of $2 (in today’s prices) would have eventually ruined him. Other people at Caesar’s time had obviously much less: ergo, the world today is incomparably richer than before.


The exception is of course the dubious goods of position and domination. But I don't want these, and don't want to want them.

"Alisifuyejua, limemwangaza" is a Swahili proverb meaning "the sun shines on the one who praises it".

I like it a lot; it reflects a couple of things about human happiness. It's probably orthogonal to the reference class stuff above; instead it's another component of a good stance toward the world: looking for the good in things. There's a hint of positive-thinking woo to it — as if the world responded causally to devotion — but discard that in favour of:


(Other things I take it to not be saying: "Fake it til you make it"; "misery is the fault of the miserable"; "hope is enough to be happy".)

But how much is receptivity under our control? It will take some odd psychology work to capture that variable. Interesting political-theory discussion of being receptive as the key to most good things here. ("Ethics and Global Politics" Vol 4, No 4 (2011).)

Assume that the above sort of thing was arbitrarily powerful, that we could feel good at any moment. Is generalised levity desirable?

An old current of thought is dead-set against it (I call it "lacrimism", to go with the ancient doctrine "deathism"). Roger Scruton can always be counted upon to piss in the beer with style: he believes that ubiquitous wonder and joy is impossible, and would make us swinish idiots, "a kind of postmodern individual" he doesn't want to be seated next to at a dinner party:

Everything deep in us depends upon our mortal condition, and while we can solve our problems and live in peace with our neighbours we can do so only through compromise and sacrifice. We are not, and cannot be, the kind of posthuman cyborgs that rejoice in eternal life, if life it is... The soul-less optimism of the transhumanists reminds us that we should be gloomy, since our happiness depends on it.


We should listen to this, but we have reason not to heed it. Not least because lacrimism is self-fulfilling: if no-one believes that it is possible to have a Good life without suffering and vice, it can never become possible. This sounds idealistic, but I think its counter-quietism is inherent to science:

the greatest enrichment the scientific culture could give us is... a moral one... scientists know, as starkly as any men have known, that the individual human condition is tragic... But what they will not admit is that, because the individual condition is tragic, therefore the social condition must be tragic, too... The impulse behind the scientists drives them to limit the area of tragedy, to take nothing as tragic that can conceivably lie within men’s will....

Farewell happy fields
Where joy for ever dwells: hail horrors, hail
Infernal world, and thou profoundest hell
Receive thy new possessor: one who brings
A mind not to be changed by place or time.
The mind is its own place, and in itself
Can make a heaven of Hell, a Hell of Heaven.
What matter where, if I be still the same,
And what I should be, all but less than he
Whom thunder hath made greater?