Friend 1: Do you know any writing on the recent trend of milennials/zoomers going for ‘earnest’ or ‘wholesome’ content

Friend 2: We live lonely, disconnected, meaningless lives in a broken society on a dying planet. If Avatar: The Last Airbender or videos of people rescuing ducks brings a moment of emotional well-being into someone’s life, so be it. I also think it’s for the same reason that we’re currently obsessed with the end of the world and can’t get enough zombie movies and games about nuclear war.

Friend 1: I guess a better question would be: “Is youth culture inherently sardonic and ironical, and do people deep down resent that.” Why do you think our culture is so nostalgic now?

Friend 2: I think it’s a misstep to assume that the Millennial/Zoomer desire for wholesomeness is ironic. I think that, even if it was initially ironic (out of a sort of defensive desire to be ‘cool’) or whatever, a lot of it is entirely sincere now. Personally, about 3 years ago, I watched all of The Last Airbender while I was recovering from a really bad panic attack and it genuinely made me feel a lot better.

Friend 1: No sorry my point was the default mood of our times is irony, and people’s desire for earnest things is genuine and sincere, I didn’t make that clear.

Friend 2: The easy answers are that people are trying to go back to “a better time”, but considering that most of the people celebrating 1980s culture weren’t born until at least the 1990s, it can’t be only that. I personally think that a lot of it is to do with the 80s being enormously optimistic (in an aesthetic sense). 80s design was all about the future - sharp angles, bright colours, an obsession with technology. But, more than that, it’s not only the 80s - the 90s are coming back now as well. Surely it can be argued that a desire for sincerity and earnestness is exactly because the default mood of our time is ironic? Is it too simple that one is simply a response to the other?

Friend 1: My thoughts too. I think the big cultural change of the last twenty years is people extending their adolescence way into the late 20s and 30s. And the rise of ‘don’t know how to adult’ lingo. Maybe the nostalgic thing is part of that. Like I think you could make a fair case for rumours by Fleetwood mac being one of the most universally popular albums with under 40s atm. By which I mean amongst middle-class people in Canada etc. (I’m aware that if you live in raqqa you probably have other cultural shifts that come to mind when musing on the last 20 years.)

Friend 2: I think that extended adolescent thing has more to do with technology than people realise. Technology is literally changing the way that society expects people to work, socialise, present, behave etc faster than they can adapt to it. In response, I think a lot of people defer committing to ‘a life’.

I am unpersuaded that the impulse to sincerity is new (that is, less than twenty years old), it’s just more visible now.

One good keyword is “the meaning crisis”: i.e. the absence of satisfying total objective systems that make you feel like you understand your role, can measure your success.

No one runs surveys on this so I’ll use famous manifestos as a proxy since I just need to show that there are examples over time:

Con: I think teens just need to do the opposite of what’s around them. Irony is pervasive now, so (some) go anti-irony. But sarcasm is versatile, so you can still be sarcastic about sarcastic people; you can negate from inside.

There’s also a hybrid pap of sincerity and irony which is maybe more common than sincerity: consider any Disney / Marvel / etc product: almost every line of dialogue will be sassy, and parents are more often than not the bogeymen, but underneath the work is black-and-white morality tale, with friendship, folk deontology (“we don’t trade lives”), and vague but ironclad humanism.

Allow me some silly theorism, to drag in abstruse academic bullshit to this discussion of silly pop culture products. Some people blame intellectuals for irony. There’s a huge cottage industry of secular prophets denouncing irony. They call it “cultural Marxism” or whatever the almost-made-up bogeyman is. Think Jordan Peterson, James Lindsay, and many more unsavoury characters.

I think they are literally twenty years too late. Twenty years ago, if you wanted to be an intellectual (which stupidly means: “person who thinks about society”), you had to pay some lip service to the French Theorists, or set out in explicit opposition. But Theory is dying. In its place are a new wing of anti-pomo dogmatists with nothing in common with them except radicalism and jargon. The rise of cancelling and the political domination of inner life could not happen in a truly ironic worldview. Instead we get the Marvel version of irony: sassy Puritanism.

Is youth culture inherently sardonic and ironical, and do people deep do…

It’s inherently about looking cool, and among emotionally incompetent people in pain, a perennial shortcut to coolness is negativity, detachment, and seeming not to care. But both Tony Stark and Captain America are cool: sincerity has always been an option in youth culture

Why do you think our culture is so nostalgic now?

I buy Friend 2’s bit: nostalgia is a way of fighting loneliness. If there are now millions of subcultures, if it is now harder to interact with a random peer because the options spread us all out so much, then pop culture and remakes allow us to go back to when there was a shared milieu.

This reinforces neoteny, our twenty year adolescence: you can easily go back to the old if you’re not very emotionally distant from it.

Ofc adults in the past were equally bewildered, if not more bewildered than us. But the taboo against admitting it disappeared some time in the last 30 years. Slackers and losers gained some ground. Oh and ofc nerds massively gained status, and we are highly childish in two senses: social incompetence and open enthusiasm

We live lonely, disconnected, meaningless lives in a broken society on a…

Another reason for nostalgia, fleeing backward, is if you believe the present is broken and not going to improve. My big prediction is that this reflexive pessimism is going to drop this decade. This year has seen 4 or 5 giant tech breakthroughs, and there are more coming soon. I also think the exaggerated timelines and extent of the climate emergency will lead to a fall in doomy greens.

It’ll come back of course. And pessimism is more robust to facts than optimism, so it’ll never go away entirely.

When was the last time “The future is going to be fun” was a dominant view? 60s?

So despite being an edgy stemlord I will be reading Foucault and Bourdieu this year.

If this discussion was social science rather than mere criticism, we’d have to unpick the several dimensions being squashed:

with culture war left/right stuff jittering everything a bit across all these axes.

The only reason this post isn’t useless, that it isn’t fatal to squash them, is that many people allow themselves to be psychically herded into a flat 1D projection of real political/ethical//existential space. 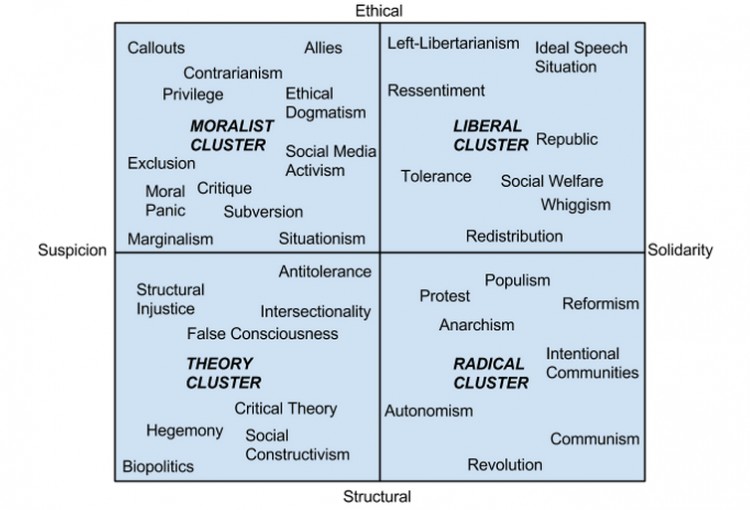 Ok I need to shut up but:

Irony is good because it’s sceptical, and we run a permanent yawning deficit of scepticism as a civ.

Irony is bad because it’s deadening, it interposes itself between you and direct enjoyment, direct communication, the ding-an-sich or even ding-für-uns.

Sincerity is dangerous because it must be credulous, it must take preferences, experiences, naturalness for granted, at least in the moment. Chronic sincerity invites manipulation, disinformation, and so on. As always, we must work out how to maintain both.

One solution is to be sincerely truth-seeking, honestly critical. DFW is a model, or Rorty’s “yes they’re a eurocentric fiction but I still insist on human rights”. These stances are unavailable to most people, because they don’t feel very good: they’re a tightrope act of negative capability. Almost no one can apparently do this. I have to watch myself or else I fall into a culture war faction, or an anti x mood, or self-satisfied technocrat superiority.

Wish there was more data on this