Imagine living, in order of birth, through the life of every human being who has ever lived… Your life lasts for almost four trillion years in total. For a tenth of that time, you’re a hunter-gatherer, and for 60 percent you’re an agriculturalist. You spend a full 20 percent of your life raising children, a further 20 percent farming, and almost 2 percent taking part in religious rituals. For over 1 percent of your life you are afflicted with malaria or smallpox. You spend 1.5 billion years having sex and 250 million giving birth. You drink forty-four trillion cups of coffee. As a colonizer, you invade new lands; as the colonized, you suffer your lands taken from you. You feel the rage of the abuser and the pain of the abused. For about 10 percent of your life you are a slaveholder; for about the same length of time, you are enslaved.

But now imagine that you live all future lives, too. Your life, we hope, would be just beginning. Even if humanity lasts only as long as the typical mammalian species (one million years), and even if the world population falls to a tenth of its current size, 99.5 percent of your life would still be ahead of you. On the scale of a typical human life, you in the present would be just five months old. And if humanity survived longer than a typical mammalian species—for the hundreds of millions of years remaining until the earth is no longer habitable, or the tens of trillions remaining until the last stars burn out — your four trillion years of life would be like the first blinking seconds out of the womb.

If history were a football field, all of human history would occupy an area the size of my hand. 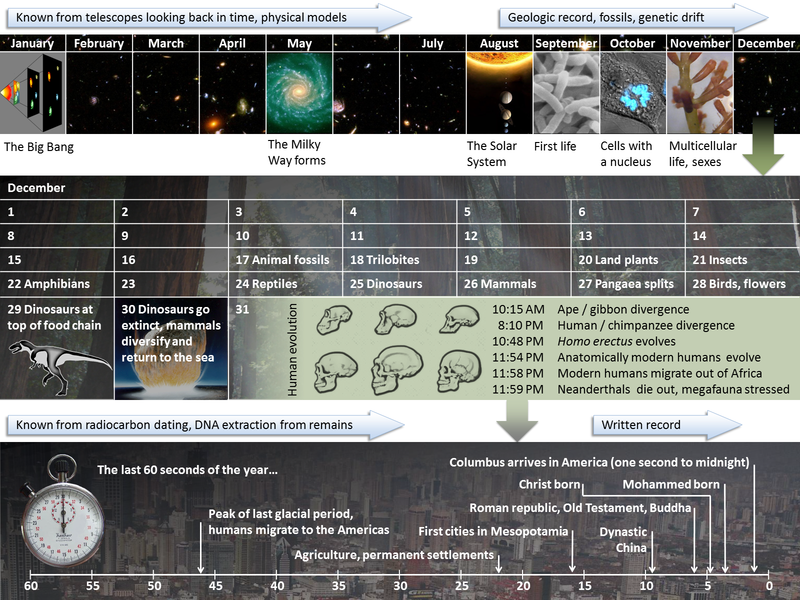 There are always some human beings who live to be a hundred. More do so today than ever before, but there have always been some… It comes as a shock to realise that the whole of civilisation has occurred within the successive lifetimes of sixty people – which is the number of friends I squeeze into my living room when I have a drinks party. Twenty people take us back to Jesus, twenty-one to Julius Caesar.

The whipping post. The lynching tree. The wagon wheel. They were the stories of slavery, an inheritance of fear and dread, passed down from father to son. The boy, barely 5, would listen, awed, as his father spoke of life in Virginia, where he had been born into bondage on a plantation during the Civil War and suffered as a child laborer afterward.

As unlikely as it might seem, that boy, Daniel Smith, is still alive at 88, a member of an almost vanished demographic: The child of someone once considered a piece of property instead of a human being.

Arthur M. Schlesinger, Jr. died in 2007. He saw the Internet rise to become a new means of communication and worked alongside his son as a blogger. He saw the Soviet Union collapse. He saw the folly of Vietnam… He saw the end of World War II and the beginning of Soviet domination of Eastern Europe. He saw television begin… He saw the Great Depression. He saw the dust bowl, and the migration of workers to the west. He was two when… the 19th amendment – women’s suffrage – was passed, millions died in a worldwide flu epidemic, and the first radio station went on the air… William Frederick Cody, also know as “Buffalo Bill,” died.

William Cody died in a country that had forty eight states, a telephone system, and nearly ten million Ford Model T’s… At the turn of the twentieth century, he was the most recognized celebrity on the globe. He toured London and met the Pope… He cheered the news of the first plane and incorporated the Spanish-American War into his show… The first skyscraper – ten stories tall – was built in Chicago when Cody was forty. He read in the newspaper of the first light bulb… service in the Pony Express. He was born into a United States that had only twenty nine states, and where half those states supported the owning of slaves. In the year of his birth… thousands died in Irish Potato Famine while thousands more fled to America, the first woman doctor in the United States was awarded her degree, and John Quincy Adams, sixth president of the United States, died…

It was Adams who represented the interest of Africans aboard the Spanish slave ship, Amistad. A few years before that another ship, the H. M. S. Beagle, returned home from a long, fruitful voyage. The first train service began in England. The Cree were removed from their lands in Georgia and forced west into Indian Territory, despite Adam’s efforts in nullifying an abusive treaty… He was born in the colony of Massachusetts in the same year that Daniel Boone first crossed through the Cumberland Gap to reach Kentucky.

Not impressed? It’s only two more life spans to William Shakespeare. Two more beyond that, and the only Europeans to see America are those who sailed from Greenland. You’re ten lifetimes from the occupation of Damietta during the fifth crusade. Twenty from the founding of Great Zimbabwe and the Visigoth sack of Rome. Make it forty, and Theseus, king of Athens, is held captive on Crete by King Minos, the Olmecs are building the first cities in Mexico, and the New Kingdom collapses in Egypt.

Sixty life times ago, a man named Abram left Ur of the Chaldees and took his family into Canaan… A few lifetimes before that, and you’ve come out the bottom of that dime. You’re that close to it.

I recently constructed such a personal generational chain back 1,000 years. I searched for a notable person who died shortly after I was born. A few minutes on Wikipedia turned up the explorer Sven Hedin. I then found a notable person who was born shortly before Hedin died. And then someone born before he died, and so on. With little effort I can arrange a chain of only 13 people that will reach back 1,000 years…

If anyone takes a generational concern for the future of mankind, it should be Christians. If not the followers of Jesus, then who will contemplate that place we are headed? It is written in Joel 1:3: “Tell your children of it, and let your children tell their children, and their children to another generation.” The future always begins right now.

If we assume each scientist is 27 years old when they receive their PhD, and 80 years old when they die, then in my model the PhD grantees from 1959-2012 are alive, and those from 1900-1959 are dead (my apologies if I have given you an untimely death). By that measure, exactly 90% of all scientists that ever lived are currently alive. Of course, this ignores scientists that lived before 1900, although I expect that number to be small relative to the millions of scientists alive today. Technically, de Solla Price said it was 80-90%, so within that range of uncertainty, the statistic probably still stands.

Running overtime is the one unforgivable error a lecturer can make. After fifty minutes (one microcentury as von Neumann used to say) everybody’s attention will turn elsewhere even if we are trying to prove the Riemann hypothesis. One minute overtime can destroy the best of lectures.

A billion seconds sounds like a long time: After all, a billion is a pretty big number. But as we can see, it’s actually quite manageable, depending on how you look at it. And this is only one of the many quantities we are confronted with from our universe that can be viewed on the human scale, from the size of a neutron star (it could fit comfortable in the Boston metro area) to the frequency of supernovas in our galaxy (about once every hundred years). These are intersections of the cosmic with the human


« Scoring the Big Three The best of Scott Aaronson (for laymen) »