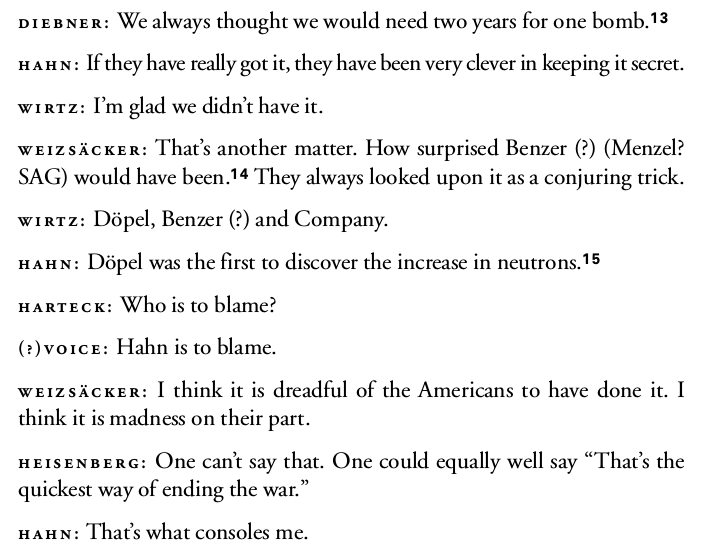 There are few, if any, other instances in recorded history where we have the conversations of leading figures as they complete one era, come to terms with it, and prepare their strategy for the next. It is as though these men were lifted out of history at a crucial turning point—from the age of conventional weapons to the nuclear era — placed within a timeless container and told to discuss their past and future as the recorders roll.

Astonishingly dramatic; also as pure as primary sources get. Months of secret eavesdropping on the German nuclear scientists, including just as they hear of Hiroshima and so their eclipse. Innocent of the microphones, the men concede their ignorance without ego, their character without any obfuscating propriety.

There are still two impurities: their words are both transcribed and translated by strangers (the German originals were destroyed). The physicists speak to us here in full sentences, with little of the fragmentariness and repetition of real speech. And it takes someone as highly trained as Bernstein to get us over the technical barrier. Even so, this is as plain and self-interpreting as history gets. For six months these men play madlibs, argue, and run around the garden, while the English and we listen in.

Two of them are unjustly detained: Hahn is a sweetheart and von Laue a droopy hero. The Party functionary Diebner is a funny guy, even though he has the most responsibility for the Nazi weapons project. Harteck is the most technically astute by far: he guesses a huge amount correctly, all in the teeth of loud ignorance by his more prestigious peers. von Weizsacker is the slimiest. Heisenberg is just weird: there’s a faint echo of the clear-sight-and-moral-vacuum of Eichmann. Enormous intelligence and no sense. 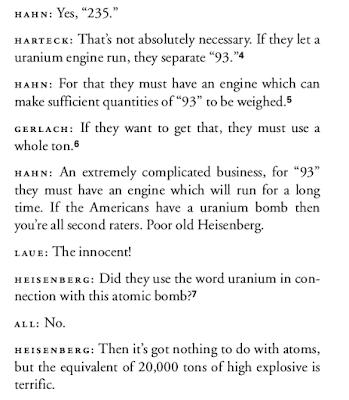 The morality of their wartime actions does not come up very much (except when raised by sweetheart Hahn or von Laue). They are mostly glad of the destruction of the Nazis, and Wirtz is horrified by the scale and singularity of SS murder. But the rest are more self-regarding than pro or anti Nazi. (Again, it is wonderful to read these and actually know they meant it.)

(What about the morality of our reading the reports? I don’t have a clear opinion, but doing so after their deaths seems mostly fair.)

They very often speak about money, Heisenberg in particular. (Not just research funding or aid for their families in Occupied Germany, but dolla dolla bills.) On hearing that Hahn had won a Nobel:

"it says that you are supposed to receive the Nobel Prize for 1944." The excitement that struck the ten detainees at this moment is hard to describe in a few words. Hahn did not believe it at first. In the beginning he turned away all the offers of congratulations. But gradually we broke through, with Heisenberg in the lead, who congratulated him heartily on the 6200 pounds.

Bernstein’s editorial voice is a bit strong. Representative footnotes on the transcripts:

But his other qualities are huge and unique: he knew some of the protagonists personally, and worked on nuclear weaponry himself. He is out to get Heisenberg, and overreads a few times. But this is because people (Powers, Frayn to a degree) persist in rose-tinting him: there’s this idea that Heisenberg feigned incompetence at reactor-making as anti-Nazi activism. The transcripts make clear that he’d have made a bomb if he could, not because he is a Nazi or a German but because he was amorally curious, and hungry for primacy. Heisenberg does object to Nazism. But not very strongly.

Bernstein’s conclusion is that the project was pretty much a shambles. They had a two-year head start on the Allies, but failed for several reasons: they had < 1% of the funding of the Manhattan Project, an unbelievably bad administration and communication of data and ideas, and key resources like deuterium kept getting bombed. But Bernstein feels able to go for the jugular:

reading this lecture, I am once again struck by the intellectual thinness of this group. Here are ten German nuclear scientists — nine if one does not count von Laue — who are supposed to be the cream of the crop, the intellectual elite, of German nuclear physics, men who had been working on these questions for several years. And look at the discussion it produced.

To see what I have in mind, let us entertain the following fantasy. Suppose the tables had been turned and ten of the best Allied scientists had been interned in Göttingen when a hypothetical German atomic bomb went off. Whom shall we include? Fermi, Bethe, Feynman, Serber, Wigner, von Neumann, Oppenheimer, Peierls, Ulam, Teller, Bohr, Frisch, Weisskopf... What would the technical conversation have been like? No doubt there would have been disagreements and some fumbling. But like this? The question answers itself.

Yet even with these handicaps, it looks like Harteck could have built a basic pile in 1940, if the project was headed by someone less arrogant than Heisenberg. And that pile would have brought all the funding, and maybe sorted out their many collective muddles and lack of engineering care.

5/5 for Bernstein’s commentary and the hair-raising fact of their existence.


In this case, don't trust me much. I am no physicist, and only half a scientist.


« Why care about genetic privacy? Is education worth it for society? »